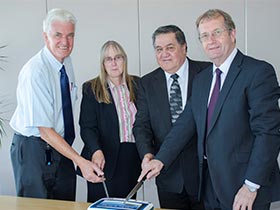 Waiariki Institute of Technology has joined the Bay of Plenty Tertiary Education Partnership, heralding a new era of educational collaboration and more opportunities for Bay of Plenty students.

The Tertiary Partnership, which also includes Te Whare Wānanga o Awanuiārangi, Bay of Plenty Polytechnic and the University of Waikato, provides a unique collaborative approach to tertiary education provision in the Bay of Plenty. The first of its kind in New Zealand, the Tertiary Partnership works with the region by providing increased local tertiary education options and providing education in the areas identified, for the region to achieve long-term sustained growth.

Waiariki already works closely with each of the other three institutions on a number of teaching and research projects. The Tertiary Partnership will strengthen these initiatives as well as provide new educational opportunities for Bay of Plenty people in a bid to meet the needs of a rapidly growing region.

There are 271,248 people in the Bay of Plenty now, estimated to reach 403,000 by 2051, of which the highest growth will be in young Māori. Government data shows the region lags well behind the national average of 14.2% of people who have bachelordegree qualifications or higher. As a result, skill shortages will significantly impact the region’s ability to support its own economic growth.

Professor Roy Crawford, Vice-Chancellor of the University of Waikato and Chair of the Tertiary Partnership Executive was delighted Waiariki had joined the Partnership. “This enhances our ability to provide leadership in the creation of a seamless tertiary education system in New Zealand," he said.

Bill Wasley, Chair of the BOP Tertiary Partnership Steering Group indicated a priority for the Partnership this year is to support the development of a Bay of Plenty Tertiary Education Action Plan, which will include a wide range of stakeholder input. The Partnership will also continue to develop plans for a Tauranga-based city centre tertiary campus.

Waiariki Chief Executive Professor Margaret Noble believes the strength in working collaboratively in knowledge sharing, initiatives, research and other projects will produce a “whole of Bay of Plenty focus” and support for the wider region.

“By collaborating we can raise the profile of Bay of Plenty-wide tertiary education and with the help of our stakeholders we can shape the way to go forward and improve access to learning,” said Professor Noble.

Chair of the BOP Tertiary Education Steering Group Bill Wasley acknowledged the significance of the extended partnership which he said will promote a wider regional approach to tertiary programming and research delivery.

“This tertiary collaborative arrangement, supported by a range of regional agencies, bodes well for future development of the region and its communities,” says Mr Wasley.

The principal aims of the Partnership are to: