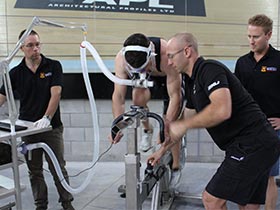 University of Waikato sports scientists have been working with New Zealand’s world champion sprint cyclists as they prepare for the 2014 Commonwealth Games.

Dr Matt Driller, a senior lecturer in Sport and Leisure Studies at Waikato and colleague Joe McQuillan have been stationed at the Avantidrome in Cambridge where the sprint cyclists train, testing and monitoring aspects of the cyclists’ fitness.

They work closely with Bike NZ sport scientist Damian Wiseman. “It’s great having all the cyclists in one place,” says Mr Wiseman. “We’ve been able to get a better understanding of them aerobically and physiologically. The testing helps us modify training and optimise what we’re targeting.”

There are mutual benefits, he says. “We get questions we want answered and these guys [university sports scientists] get access to elite athletes,” says Mr Wiseman.

In the University of Waikato’s sport science lab at the Avantidrome, university staff can also work with athletes to measure a range of variables including blood lactate, peak power over set time periods, VO2max and metabolic efficiency. 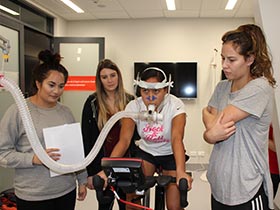 Waikato’s science lab manager is Joe McQuillan who is completing his PhD researching the effects of beetroot juice supplementation on aspects of cycling performance and physiology. He says university sport and leisure studies students are benefitting from using the lab too.

Despite the lab only being fully functional for a few weeks, Mr McQuillan says this learning format has already proved successful, with senior lecturer Dr Brett Smith holding tutorial exercises with second year students working in small groups collecting data from one of their classmates during maximal exercise assessment.

“The students are being exposed to unique, hands-on practical learning environments. They learn how to use equipment, collect and collate data and then back in class they learn how to interpret information.”

He says gaining confidence at undergraduate level will set students up nicely for postgraduate research, making them confident and competent at running a variety of lab-based assessments.

Mr McQuillan says they can also offer testing to community and recreational athletes. “While it’s early days, I see us being helpful for coaches and athletes in a variety of sports - people who might need information to aid and guide their training to enhance their athletic performance.”