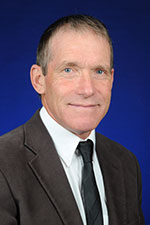 New Professor for Science and Engineering: Professor Brendan Hicks from the Department of Biological Sciences.

Brendan Hicks says it’s a case of “long-term diligence paying off” as he is promoted to professor at the University of Waikato.

Professor Hicks is best known around campus for his electro-fishing expeditions on Oranga Lake, part of a wider project to decrease the numbers of pest fish in the Waikato region’s lakes.

After completing his PhD at Oregon State University and a stint as a scientist at MAF Fisheries, Professor Hicks started at the University of Waikato in 1992 as a senior lecturer in the Biological Sciences Department, which he now chairs.

Interest in ecology of fish

Early on, Professor Hicks’ research interests lay in stream ecology, trout and native fish and moved over time to his current emphasis on the ecology of fish in lakes and large rivers and pest fish. He enjoys being a part of the Department of Biological Sciences, which he says is “very research-active”.

He’s continually encouraged by the students he teaches, especially those who go on to undertake their own research projects. “It’s exciting to see students discovering their own knowledge. There is a lot of potential for fresh perspectives out there,” he says.

Professor Hicks was one of new six professors named this week at the University of Waikato. The others are Brian Gabbitas and Kim Pickering from Engineering, Kathryn Pavlovich from Management, John Williams from the Faculty of Education and Cathy Coleborne from the Faculty of Arts and Social Sciences.