New professor for Science and Engineering 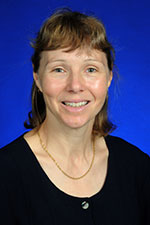 When Kim Pickering first came to the University of Waikato in 1994, there were only three other people working in engineering. It wasn’t even a department, let alone a school.

“It was the Centre for Technology,” she says.

“There was one person in materials processing, they were the only other fulltime person, another in forestry, and a half-time process engineer.”

Twenty years later, and Kim has now been promoted to professor in the Faculty of Science and Engineering, which boasts about 20 academics.

Two decades at the University

The promotion, she says, “means a lot to me,” after two decades at the University.

“It’s really neat. It’s nice to know my work has been recognised.”

Kim’s background is in composites and modelling the failure of composite materials.

Her first degree was in material science and engineering at the Imperial College of London and she completed her PhD at Surrey University before heading to New Zealand.

“I saw a lectureship at Waikato,” she says.

“I didn’t know where that was but it was New Zealand.”

She’s been here ever since and loves her job.

“There are not that many jobs where you get such choice in what you do.”

“I’ve been lucky with my line managers here and I’m very proud of Waikato and want to see it continue to do well.”

New professor for Science and Engineering is licensed under a Creative Commons Attribution 4.0 International License.