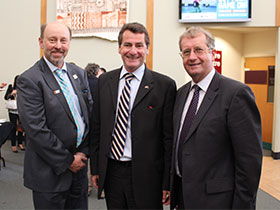 The US Consul General in Auckland, James Donegan, says New Zealand-US relations are probably better today than they have ever been.

Mr Donegan was speaking at the University of Waikato at the annual Krinock Lecture and told his audience of lawyers, law lecturers and students that New Zealand and the US were working co-operatively on many issues, including anti-drug trafficking, anti-piracy, climate change, mine clearing and military exercises.

Mr Donegan has been with the US State Department for 20 years and his assignments have included Caracas, Accra, Washington, Rome, London and Basra, Iraq.

Expanding New Zealand and US relations

His role in Auckland is to lead the Consulate General in expanding the United States' political, economic and trade relationship with New Zealand, increasing the Mission's outreach to youth, and promoting academic and cultural exchanges.

Mr Donegan said he was optimistic that the 12-nation Trans-Pacific Partnership would be signed and insisted it was not a reaction to China’s increasing influence in the region, saying there was nothing to preclude China from signing the agreement one day.

With three years’ experience as Counsellor for Political Affairs at the United States Mission to the United Nations in New York, Mr Donegan and his team negotiated Security Council resolutions on many global issues including conflict areas in Africa, eastern Europe and Central Asia.

He said that while the UN might seem like an unwieldy beast, the sorts of issues it deals with could not be undertaken by any single country. “Dealing with conflicts over multiple boarders, pandemics, climate change, it cannot be done on a unilateral basis,” he said.

The UN food program has fed 90 million people in 75 countries and the UN currently has 100,000 peacekeepers in 15 operations.

The Krinock Lecture was established by the faculty conference of Cooley Law School to honour their late colleague and former dean, Bob Krinock and staff and students from Cooley come to Waikato each year as part of their ‘Downunder’ Study Abroad Programme.

New Zealand and US relations looking good is licensed under a Creative Commons Attribution 4.0 International License.