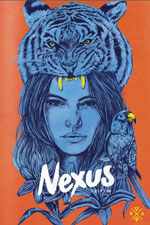 Nexus was also runner-up for three other awards, including the evening’s top award for Best Overall Publication.

“We have a fabulous editor in Rachael Elliott, who did the job in 15 hours while completing her Masters, and one very talented full-time graphic designer named Haylie Gray. No-one else got paid and we still beat out magazines with a lot more resources. Imagine what would have happened if we had been able to pay an editor for 30 hours, we may have won everything.”

Your Weekend Editor Sarah Daniell from the ASPA judging panel described Nexus as “just fantastic, bold and sassy. You want to pick it up”.

“We have been able to get a great balance of writers this year who have been doing this for a long time and consistently contribute great work, and new writers who have brought new energy”.

“I think that is reflected by the fact that two of our new contributors, Peter Dornauf and Christopher Reive, were runners-up for Best Columnist and Best Sports Writer respectively. For each writer we nominated for awards, there were at least three others who would have been equally deserving. We’re very lucky to have such talent.”

New Zealand Herald’s Paul Harper, who judged Nexus as joint winners of Best Social Media, said the magazine takes an edgy approach to Facebook and is rewarded with good engagement.

“It just shows that we are on the right track,” says Raffan. “Edgy and provocative are things we strive for and each year we are building a new tone and a new volunteer base for the magazine. We are also lucky that we are being supported more and more by the University, which shares in the vision of a magazine we can all be proud of, while giving us room to be independent and critical.”

In previous years, the magazine’s only other ASPA win came in 2012 when Dr Richard Swainson won the award for Best Columnist.