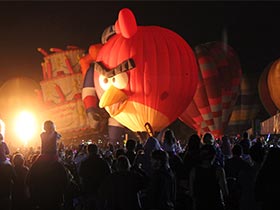 Glow on: Angry Birds and giant birthday cakes filled the sky at the Nightglow.

An estimated 80,000 people flocked to the University of Waikato’s sports fields on Saturday 29 March as the Balloons over Waikato ASB Nightglow got underway.

Spectators watched as hot air balloons inflated to music, illuminated by bursts of flame during a playlist of rock songs spanning five decades including Great Balls of Fire by Jerry Lee Lewis.

A big crowd-pleaser was the 29-metre high Hamilton city 150th birthday cake balloon, which was dwarfed only by the 33-metre high Rocketman. There were food stalls and carnival rides, and the night concluded with a massive fireworks display.

The University officially announced its plans for Community Open Day on 17 May to the public at the Nightglow. For more information, visit www.waikato.ac.nz/go/community-open-day

The University of Waikato is a Strategic Partner of the annual Balloons over Waikato event.