Oriana sings her way to the top 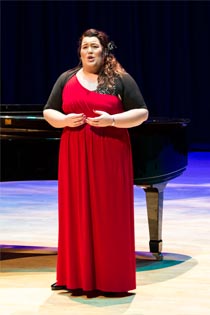 Soprano Oriana Kershaw has sung her way to first prize at the Waikato University annual Aria Competition, which took place on Friday 6 June.

The Aria competition is for current music students of the University of Waikato who are studying classical, opera style singing. Past winners of famous Aria competitions are the like of Dame Kiri Te Kanawa and Senior music Fellow at Waikato, Dame Malvina Major.

Every year an external adjudicator is invited and the special guest judge for the evening was Dr Te Oti Rakena, who is head of vocal studies at the University of Auckland.

Dr Rakena was thrilled with the performances from all the contestants and was impressed with the technical and musical prowess displayed and particularly enjoyed the way the singers performed so beautifully within their abilities.

“I felt the evening was a grand success and once again demonstrated how much vocal performance at the Conservatorium of Music has developed over the years.

It was a great joy to see the commitment and energy with which the singers gave such passion and presence to their performances.”

Oriana and Chelsea are both completing their Postgraduate Diploma’s in music and Filipe is a second year Bachelor of Music student (performance) majoring in voice.

Oriana sings her way to the top is licensed under a Creative Commons Attribution 4.0 International License.