Origin of a Species 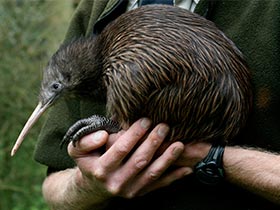 Kiwi study: Adelaide based molecular biologist professor Alan Cooper will be talking about how ancient DNA reveals the bizarre evolutionary history of the kiwi at the University of Waikato.

An Australian-based, New Zealand born academic will reveal what are being called startling revelations about the origin of the kiwi at the University of Waikato on Monday.

Professor Alan Cooper, a specialist in the analysis of ancient DNA, is based at the University of Adelaide and has a paper being published in the Science magazine on Friday, 23 May which outlines his latest work. He will deliver his talk, Ancient DNA reveals the bizarre evolutionary history of the kiwi, at the University of Waikato at 9am on Monday.

Professor Cooper is a molecular biologist based in Adelaide and was awarded an Australian Research Council Federation Fellowship award in 2004. That allowed him to move from Oxford University (where he was the Director of the Henry Wellcome Ancient Biomolecules Centre) to Adelaide to establish the Australian Centre for Ancient DNA (ACAD).

He specialises in using ancient DNA to record and study evolutionary processes in real time, especially those associated with environmental change.

Professor Lowe says his colleague’s talk on recent ancient DNA work on the kiwi “is certain to be stimulating and interesting”.

The talk is open to the public.

Origin of a Species is licensed under a Creative Commons Attribution 4.0 International License.