Out of uni and into a job 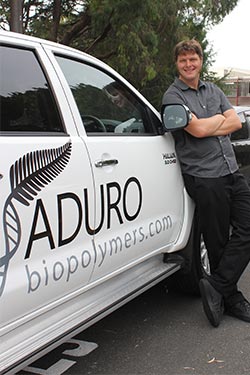 Engineering study success: Jim Bier graduates with his doctorate in materials and process engineering (MAPE) in April and then goes straight to a job at Aduro Biopolymers.

When Jim Bier was contemplating postgraduate study, he came with his sister to check out Hamilton city and the university campus. Half joking, he said to his sister he’d like some kind of sign that Waikato was the right destination. “Then we drove round the corner in Hamilton East and there was a billboard saying ‘start the next chapter of your life at the University of Waikato’.”

That sealed it, and Jim now calls Hamilton home.

Next month, on April 14 at Claudelands Events Centre in Hamilton, Jim will graduate with his doctorate in materials and process engineering (MAPE).

He began his masters study at Waikato in 2009. “I wasn’t planning on doing engineering. At Canterbury I’d completed a Bachelor of Science in biochemistry, then a diploma in management and I’d been working for a while. I was thinking about biology or chemistry for my masters but then at Waikato I saw a door with ‘Engineering’ written on it and made some enquiries.”

His engineer father was more than pleased with his son’s decision, and as a Waikato alumna, his mother was also happy Jim had chosen Waikato.

“The staff in Engineering said my previous experience would fit nicely with some of the research being done at the intersection of chemical and biological engineering and MAPE, and so for my masters I studied the environmental impacts associated with producing Novatein®, a bloodmeal- based plastic developed here at Waikato.”

From there, and with the financial assistance of a number of scholarships, Jim began his PhD. Much of his work was based in the University’s large scale lab, supplemented with experiments at the Australian Synchrotron Light Source in Melbourne, testing how protein chains in Novatein® respond when put under different conditions. With that information product developers can improve proccessability as they work towards getting a better resin for some products currently in development.

The development company doing that is Aduro Biopolymers. It’s a natural resource based materials and biopolymer business, a spin-out company formed by WaikatoLink, the technology transfer office of the University of Waikato. Last year when Jim handed in his thesis, they offered him a job.

He’ll get the day off for graduation, joined by his wife and two-year-old daughter. His sister will be there - the one who showed him round Hamilton more than five years ago. She too has a doctorate and is returning from the UK for her wedding taking place two days before graduation. His parents will come from Rotorua and two brothers, both at Auckland University, are also likely to arrive for the celebrations.

Out of uni and into a job is licensed under a Creative Commons Attribution 4.0 International License.