Paid incentives for farmers could lead to less pollution 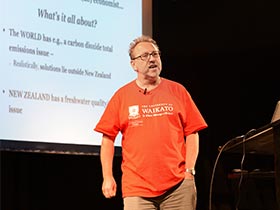 A University of Waikato economist has some ideas about managing freshwater resources, including paying farmers not to pollute.

Professor Les Oxley from the university’s Waikato Management School shared some of his ideas at a public seminar today at this year’s National Agricultural Fieldays at Mystery Creek.

Professor Oxley says although implementing taxes on polluting farmers is easy to impose, finding out what the tax rate should be is impossible for the government because every farm is different.

“Lawyers legislate, cap and ban but it lacks scientific credibility on knowing what that cap should be.

“We need freely accessible science as to the hydrology of the land, for instance, what water related issues are associated with the land and how much pollution that land can carry.”

He said paying farmers not to pollute is one of many other incentives that are needed in New Zealand rather than command and control.

He added that paying farmers is economically rational, and has strong theoretical underpinnings, but it’s likely to include legal aspects.

Paid incentives for farmers could lead to less pollution is licensed under a Creative Commons Attribution 4.0 International License.