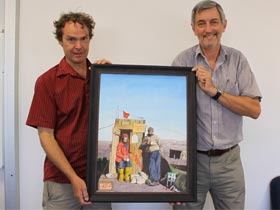 A painting depicting the first-ever Antarctic expedition dedicated to exploring Antarctic soils was gifted to the University of Waikato last month at an event held to celebrate 44 years of Earth sciences research and to commemorate the University’s 50th anniversary.

The painting features soil scientists Dr Graeme Claridge and Professor Emeritus John McCraw. Prof McCraw went on to become the founding professor and head of the Department of Earth Sciences at the University of Waikato in 1970.

Artist, Hansen Ihle, was a part-time Earth sciences student at the Waikato University from 2003-2014. Encouraged by Dr Megan Balks, a lecturer in the department, Hansen worked with Prof McCraw to bring the painting to life from a copy of a black and white photo taken during the expedition.

“I worked with John to determine the colours for the painting. Luckily he had colour slides of related scenes and even still had some of the items such as the mountain-mule pack, boots, and down-filled jacket, which he was wearing when the photo was taken,” says Hansen.

In the painting the two scientists are pictured standing outside a makeshift shelter at New Harbour, Taylor Valley, Antarctica, in the summer of 1959/1960. Undertaken under the auspices of DSIR Soil Bureau, soils were mapped and sampled in Taylor Valley and investigated at a number of sites on the Ross Sea coast.

Hansen says that the wooden shelter featured in the painting was a crate in which equipment was transported to Antarctica. “Dr Claridge and Prof McCraw then converted the crate into a shelter, which was mounted on a sledge for transport and towed across the Ross Ice Shelf from Scott Base to New Harbour using Massey Fergusson tractors.”

Current Chair of Earth Sciences at Waikato University, Professor David Lowe, says there is a strong connection between this pioneering expedition and ongoing Earth sciences research at the university.

“Many Waikato academic staff, including myself, have subsequently travelled to Antarctica to undertake research, with support and encouragement from Prof McCraw. The McCraw Glacier in the Britannia Range of Antarctica was named after him in recognition of that support. Dr Balks also spent three field seasons working in Antarctica with Dr Claridge and her collaboration in publishing Antarctic research with him has spanned more than 20 years,” says Prof Lowe.