Hillary Scholar: Melita Raravula is among 13 University of Waikato students involved in the Pathway to Podium programme.

Thirteen University of Waikato students - including two Hillary scholars - are part of a new national sports programme designed to prepare them for life as high performance athletes.

As part of the Pathway to Podium programme, they will receive early education in areas such as nutrition, mental skills and strength and conditioning training.

The Waikato hub – which kicked off with 27 athletes involved - will be managed by former Olympic cyclist Cath Cheatley, who is also a track world championship medallist and US Series Road Race Champion.

She says the programme is focussed around education and encouraging self-responsibility.

“It’s a long, tough road to become a high performance athlete and I’m excited to be able to strengthen the pathway for our talented Waikato athletes,” she says. 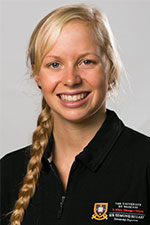 Pathway to success is licensed under a Creative Commons Attribution 4.0 International License.