Pip on track for velodrome event 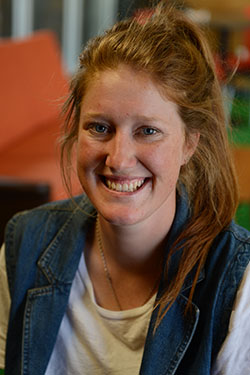 On track: University of Waikato student Pip Sutton will be one of the first to compete on the new track at the Avantidrome this week.

Cyclist and Sir Edmund Hillary Scholar Pip Sutton is one of five University of Waikato students taking to the track for the first event being held at the new National Cycling Centre of Excellence Avantidrome near Cambridge.

Fellow Hillary Scholars Madison Farrant and Callum Saunders, along with Ruby Perry and Tess Young, will join Pip on the track for the Elite and U19 Track National Championships from 13-16 March.

A former road cyclist, Pip says she had always planned to give track cycling a go, but it had been hard to find the time with other sport commitments as well as keeping up with her road cycling.

“But now with the new velodrome just down the road, it’s a perfect opportunity to make the shift,” she says.

Pip, who was the coach of the Waikato Diocesan School for Girls’ senior A team involved in a collision with a car last September, has bounced back after the crash which left her with a broken wrist.

Now in the fourth year of a Bachelor of Sport and Leisure Studies, the 21-year-old says the main challenge on the track will be adapting to a much more tactical approach to cycling.

“You have to understand where to position yourself on the track. There’s a lot to learn but I’m looking forward to it. Hopefully they’ll see that even though I’m just starting on the track, I have potential to go further.”

Pip will be taking part in five events: the 500m time trial, individual and team pursuits, and the scratch and points races.

The University of Waikato is the Tertiary Education Partner of the National Cycling Centre of Excellence (Avantidrome).

Pip on track for velodrome event is licensed under a Creative Commons Attribution 4.0 International License.