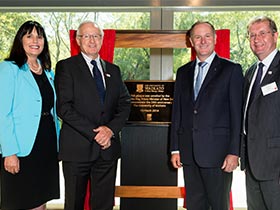 Chancellor Jim Bolger spoke of the early days when the campus was nothing but farmland and a cowshed, saying the University was a credit to past and present Chancellors and Vice-Chancellors.

In her speech, Mayor and law alumnae Julie Hardaker spoke of the strong connection between Hamilton city (celebrating 150 years) and the University, reinforcing the integral role the University plays in the region, both educationally and economically. She said the city was immensely proud of what the University had achieved over the past 50 years and gave a gift to the Vice-Chancellor to be added to a time capsule, which will be sealed then opened in another 50 years.

Professor Crawford said the University had reached an historic moment, being transformed from what once was farmland to “New Zealand’s most beautiful campus”. He highlighted many of the areas - such as agriculture, marine science, law, management and Māori - to which the University has contributed in significant ways. He said true success came from the graduates and staff, and that while the University celebrates its history, it was also looking to the future, and the opportunities ahead.

Professor Crawford also announced that Fletcher Construction has been awarded the contract for the new Law and Management building on which work is scheduled to begin mid-April.

Mr Key said that at 50 years old, the University of Waikato was just getting started, and that while the University had done extremely well, he was sure the best was yet to come.

He said universities were a place to challenge ideas, come up with new perspectives, and push the boundaries through research, saying these were the things that would make us more developed as a nation. Mr Key acknowledged the priority Waikato had placed in fostering opportunities for Māori and Pasifika students, and stressed the importance of this for the region and New Zealand overall.

A 50th anniversary short promotional film was played and a commemorative plaque was unveiled by the Prime Minister, who was presented with a copy of the book Ko Te Tangata: A history of the University of Waikato.

Other 50th anniversary events include Community Open Day on 17 where the community is invited to activities, interactive exhibits, demonstrations, tours and mini lectures on campus.