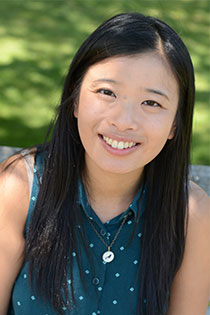 Shanghai bound: Michelle Chen has been awarded $7000 in the inaugural round of the Prime Minister’s Scholarships for Asia.

She already speaks Cantonese and now, having received a $7000 Prime Minister’s Scholarship for Asia (PMSA), Michelle Chen will have the opportunity to learn Mandarin as she heads to Shanghai on an academic exchange.

The University of Waikato law student has just completed the third year of her LLB and will go to Shanghai in February to study law and Chinese culture papers for a semester at Shanghai International Studies University. Michelle says the exchange will open her eyes to potential career opportunities once she has finished her degree.

Studying in a different legal system

“I felt ecstatic when I found out I’d got the scholarship. I’d wanted to do an academic exchange in A Semester and was interested in studying a different legal system and learning a new language so the scholarship has made this possible.”

Michelle has been to China before, to the area her parents came from in Guangdong Province, and that made her want to see more.

“Now I’ll get to live Shanghai and learn Mandarin. I’m really excited, and it will be a great opportunity to learn about another legal system.”

Michelle is one of three University of Waikato students selected to study at top education institutions in Asia next year as part of the inaugural Prime Minister’s Scholarships for Asia. In all, 89 New Zealand tertiary students were awarded the PMSA. The scholarship covers study periods from six weeks to two years, and aims to enable undergraduate and postgraduate students to gain a deeper understanding of Asia.

In July 2013, Michelle started up the regional chapter for Law For Change Waikato, a not-for-profit organisation that aims to have law students and law professionals harnessing their legal skills for the public good and to further spark public interest in law in New Zealand. Her passion lies in public law and policy, government and promoting access to justice. She also volunteers one morning a week at the Hamilton District Community Law Centre.

Funding for the PMSA of $9 million over five years was provided in Budget 2013 as part of the Government's Internationally Focused Growth Package. The scholarships are managed by Education New Zealand, the lead agency for the promotion of international education.

Applications for round two of the Prime Minister's Scholarships for Asia open this month with final submissions due by 28 March 2014.