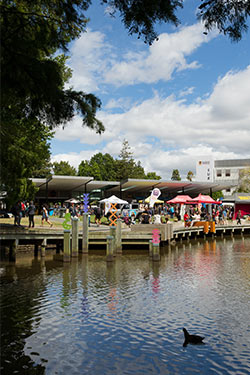 Birthday boost: New ranking as 44th best university under 50 years old is a reflection of the University’s success.

The University of Waikato has just been confirmed as one of the top 50 universities in the world in its peer group.

In its 50th anniversary year, the University has been ranked at 44 out of 5000 universities in the influential Times Higher Education Top 100 ‘Under 50’ list, two positions better than when the rankings were last issued in 2013 and 14 places higher than the 2012 ranking. The rankings only include universities less than 50 years old, and 2014 marks the final year of the University of Waikato’s inclusion in those ranks.

A young university with a bright future

“We can all be extremely proud of this achievement. While we do not have generations of history behind us, we have forged our own path and created a student experience that is world class. Our researchers and lecturers are leaders on the international stage, our campus is spectacular and our alumni continue to make an impact both nationally and around the world.”

The challenge, Professor Crawford says, is to continue that momentum for the next 50 years and beyond.

“Our determination to provide a future-focussed curriculum and to conduct world-leading research will continue,” he says.

“We have come a long way in a short time but there remains much to be done. The University of Waikato has consistently been considered among the best young universities in the world and we see no reason why this should change. One of the advantages of being a relatively young University is that we are able to try new things and change rapidly to take advantage of new developments, free from the burdens of history,” Professor Crawford says.

“Many of the exciting young universities on this forward-looking list do not see their youth as a disadvantage in the global knowledge economy. While they may not have had centuries to accumulate wealth and cannot draw on generations of alumni and rich traditions of scholarship to drive their reputations, they are free from the burdens of history: free to be more agile, lean, flexible and risk-taking, giving them an advantage in a rapidly changing global marketplace; free to offer innovative teaching and focus their research on niche, high-impact areas.”

Times Higher Education also ranks the University of Waikato as among the top 2% of the 17,000 universities worldwide while five subjects are ranked in the top 150 in the world.

One subject area - Education – is ranked 46th in the world in the latest QS Subject Rankings.

The other four subject areas, all ranked from 101-150, are Modern Languages, Economics and Econometrics, Law and Computer Science and Info Systems.

To view the full Top 100 Under 50 rankings list, visit: www.timeshighereducation.co.uk