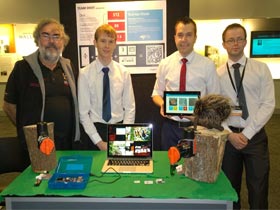 A conservation management system designed by University of Waikato computer science students has won a major prize at the New Zealand finals of the Microsoft Imagine Cup.

Jourdan Templeton, Nathan Holland and Stephen Quayle call their management system Ohiti – the watchful eye on wildlife. It involves a small transmitter being connected to a trap that records each time it is triggered. That data is relayed in real-time to a base unit. It is then uploaded to a server on the internet and processed.

The Waikato students entered the Imagine Cup in the innovation category where they were runners up, winning $2000 and some job offers too.

“We had to make a formal presentation in front of five judges and then run a showcase, like an expo, which generated a lot of interest,” says Jourdan. “There were a lot of people who came and talked to us and were keen to get involved with the project. We were really happy with the result.”

The management system provides valuable information. “We can collect a wide range of data every time a trap is activated and use that data to provide information about the environment and the impact of pests in the area. For example, Ohiti can alert you when an area of forest has more pest activity than normal. Knowing this, we can target these areas immediately. We can become more proactive than reactive,” says Jourdan.

The third-year students trialled their system in the Hamilton Gardens, setting up a chain of three Goodnature A24 rat traps roughly 50m-70m apart in a gully area.

“Our goal was two-fold. First, we wanted to make it easy to maintain the traps without sending people on a hike to check each one and secondly we wanted to provide a portal that would enable conservationists to be more proactive in protecting native species.”

The actual traps are designed by a Wellington company Goodnature. The humane traps are now being used by the Department of Conservation to kill possums, rats and stoats. “They’re self-reloading and don’t use poison, but rather a CO2 gas-powered pneumatic bolt which fires killing the animal instantly,” says Jourdan.

For the Imagine Cup, entrants are required to create an original technology project, coming up with the idea, developing a plan, building the project and submitting it in the competition. “We didn’t win the big prize – a trip to the world finals in Seattle in July - but we’re still pleased with our result and can see potential to develop it further,” Jourdan says.

At the moment the transmitter technology works best in parks or bush-land near built up areas because of its operating frequency but Jourdan says as the technology evolves it will be able to be used in a broader range of environments. “Ohiti demonstrates the potential for technology to aid the conservation and preservation of kiwi.”

Rat trap technology a winner for students is licensed under a Creative Commons Attribution 4.0 International License.