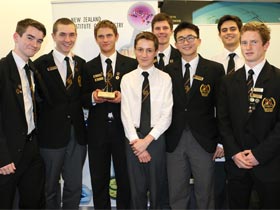 The University of Waikato event challenged 96 enthusiastic Year 13 students to spend a day in the University’s chemistry laboratories.

This was the second year in a row that Hamilton Boys’ High School has won first place in the competition and also follows a win in October last year when the school scored first place at the University’s ChemQuest chemistry quiz.

“The task was to analyse the individual levels of zinc and sulphate ions in a sample of zinc sulphate. One pair from each group of four used a gravimetric procedure to find the sulphate ion content, while the other half of the team used a volumetric method to find the zinc ion level,” says competition judge and key organiser, Dr Michèle Prinsep.

“The task this year proved to be particularly challenging, but those who did well, did very well, and the winning team achieved a near perfect result,” says Dr Prinsep.

Twenty-four teams of four students from the Waikato/Bay of Plenty regions entered in this year’s competition. All students were treated to lunch sponsored by The New Zealand Institute of Chemistry (NZIC), at the University’s halls of residence. The winning team received $200 from sponsor Hill Laboratories and a trophy, with prize money also awarded to all other place-getters.

View more photos from the event.