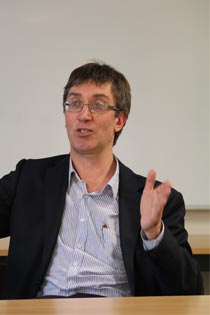 That’s the advice for students thinking of applying to become a Rhodes Scholar from two people who should know.

The first Rhodes Scholar from the University of Waikato, Andrew Smith (1989) and Nick Pirihi, who was a Rhodes Scholar in 1996, returned to the campus last week to encourage students to apply for the prestigious Rhodes Scholarship.

Smith, who attended Hillcrest High School in Hamilton, is now the chief executive of Prolife Foods.

He completed a BSc and MSc at the University of Waikato and was then keen to head overseas.

“I had no money so I applied for all sorts of scholarships, including Rhodes. It all worked out very well.”

He says along with academic achievement, the selection committee “look for someone with a bit of spark. I did school teaching, I took Spanish, I was involved in debating”.

At Oxford, he completed his doctorate in physics in three years and says it was a hugely enjoyable time.

Pirihi, originally from Ruakaka, south of Whangarei, also studied for a BSc and completed his Masters in statistics before receiving his Rhodes Scholarship.

He completed an undergraduate degree in law and says the Oxford system is vastly different to what he was used to.

“They teach you to think. It was a real eye-opener,” he says.

He encouraged students to apply, even if they thought they had no chance of being successful.

“I never considered myself as someone who would get a Rhodes Scholarship but I applied, I gave it a crack and I got it. It doesn’t cost anything to apply.”

The Rhodes Scholarship is one of the oldest and most prestigious international graduate scholarships. It is named after British businessman, mining magnate and politician Cecil Rhodes and was established through his estate.

Other Rhodes Scholars from the University of Waikato are David Rodin (1993) and Briar Thompson (2012).

The closing date for applications is 1 August. Any students who are interested in learning more about the application process should contact Senior Scholarships Advisor Gwenda Pennington on 07-858-5195 or email [email protected].

Rhodes to success is licensed under a Creative Commons Attribution 4.0 International License.