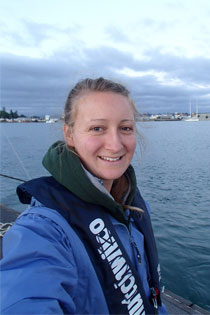 When Nicole Sturgess was at intermediate in New Plymouth, she’d tell her friends she was going to be a marine biologist, and now she is.

Nicole is studying for her Master’s degree in biological science at the University of Waikato and has been awarded a George Mason Charitable Trust Scholarship to assist with her research. The scholarship is worth $5000 for each year of her study.

She’ll be carrying out a biodiversity assessment within the Paranihinihi Marine Reserve in Taranaki, to examine the factors that may explain the high biomass of encrusting organisms within the ecosystem. She’ll also be doing some sonar mapping.

“I’ll be using multi-beam echo sonar to map large sections of the seabed habitat on Pariokariwa reef,” says Nicole. This will help her classify the different biogenic habitats on the reef.

“What interests me is finding out how effective marine reserves are as a method of conservation and what effect a ‘no-take’ reserve has on the functioning ecosystem.”

George Mason scholarships were first established in 2002 and are awarded to postgraduate students with links to Taranaki and/or are carrying out research relating to Taranaki's natural history. Nicole went to Spotswood College but now lives in Tauranga, based at the University’s Coastal Marine Field Station there. She’ll be making regular trips to Taranaki to collect data and meet different parties involved with the reserve project.

She says her research will show the observed benefits of the marine reserve and examine the effects of ghost fishing activity inside and outside the reserve. Ghost fishing is a term used to describe fishing gear (i.e. gill nets) that is lost at sea or left in the water for a long period of time, and continues to capture/kill organisms, exposed to it. 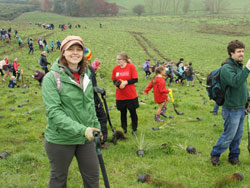 Another Waikato University student and George Mason Scholarship recipient, Kiri Cutting, is studying urban ecological restoration for her doctorate, which will take her into the city.

“Research is showing that native urban bush is immensely important for the ecosystem services it produces. These include mediation of flooding and erosion, city cooling and windbreaks, pollutant filtration (in both air and water), and support of native biodiversity,” says Kiri.

“I want to know how restoration plantings measure up as they age and how their environments change over time. I look at things such as soil moisture and chemistry as well as air temperature and humidity. Often my research sites have previously been farm land, or degraded in some way, so I monitor the various changes as the plants grow into maturing bush, becoming a complex ecosystem once again.”

Kiri’s research will help increase understanding of how to maintain bush in urban areas and identify what plants yield the best results in particular locations. “Data I collect from these sites will be used to create a predictive mathematical model. Urban restoration ecology is a relatively young science so my work will help in the development of a theoretical framework that may also be applicable elsewhere,” she says.