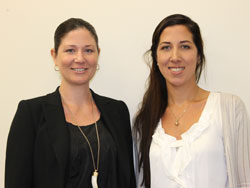 Rewards for success: University of Waikato students and sisters, Season-Mary Downs and Willow-Jean Prime both won scholarships for research into Maori, Pacific and Indigenous peoples law.

Two Northland sisters are the recipients of the inaugural Centre for Indigenous and Māori Governance PhD scholarships.

The scholarships have been provided through a decision by the University of Waikato to allocate scholarships to each of the Research Institutes within the university. Season-Mary Downs and Willow Jean Prime were awarded the scholarships late last year.

Both are graduates of the University of Waikato, Te Piringa - Faculty of Law, and recently completed their Masters of Law in Māori, Pacific and Indigenous Peoples Law

Season-Mary is currently practicing at McCaw Lewis Lawyers, a Hamilton based law firm where she specialises in Treaty of Waitangi claims processes. Willow-Jean has recently been elected as a Councillor for the Far North District Council and also has her own consultancy business.

The scholarships align to the research focus areas for each Institute. Season-Mary is researching the topic of ‘Nga Taumata o te Moana - Reconciling the Ownership and Governance of the Takutai Moana under the supervision of Professor Brad Morse and Associate Professor Linda Te Aho, while Willow Jean is researching the ‘Local Government and Maori in Te Tai Tokerau’ under the supervision of Professor Brad Morse, Professor Margaret Wilson and Andrew Erueti.

The sisters say they appreciate the ongoing support from the University of Waikato and Te Piringa - Faculty of Law. They believe in the value of continued education and look forward to working with their supervisors throughout their doctoral studies.