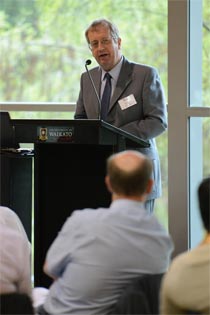 The University of Waikato recorded a $9.4 million surplus in 2013 and has retained its status as a low-risk institution with plans to increase that surplus to $9.9 million in 2014.

Professor Crawford said the surplus was based on a revenue of $225 million and was “well within the Government’s set band”, being 4% of revenue.

He listed other highlights of the past year as achieving the University’s EFTS target, an economic impact approaching $1 billion, hosting the country’s first MOOC (Massive Open Online Course), launching New Zealand’s first cyber-security laboratory and Masters in Cyber Security, receiving $15 million towards the Tauranga CBD campus, hosting the $31 million Building on Success programme and the partnership with the New Zealand Homes of Cycling’s Avantidrome.

Priorities for 2014 are to reach the Ministry Funded (MF) and Full-Cost International (FCI) enrolments, implement the new Strategy, the new Tauranga campus, the Law and Management Building, key staff appointments and launching a fund-raising campaign. The University continues to be ranked in the top 2% of universities worldwide, with five of its subjects areas ranked in the top 150 worldwide with education ranked 46th.

Professor Crawford highlighted the University’s ongoing links with events such as Fieldays and Balloons over Waikato, and its continued commitment in connecting with the community through the Distinguished Alumni Awards, Winter Lecture Series, the Great Race and, this year, the anniversary gala Ball in partnership with Wintec and Hamilton city.

The annual Stakeholder Breakfast is an initiative to keep community leaders up to date with University events and achievements.