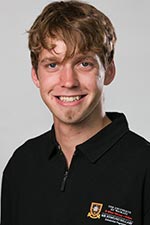 Waikato scholar: Andrew Bell has received a Sir Edmund Hillary Scholarship from the University of Waikato.

What do computer science, music and Sir Edmund Hillary have in common? At first thought, not much – unless you’re Andrew Bell.

Andrew Bell, Christchurch local, is one of this year’s Sir Edmund Hillary scholarship recipients and has left the south to study a Bachelor of Computing and Mathematical Sciences at Waikato University.

He’s already got another degree under his belt – a Bachelor of Music from Canterbury University.

“I had to complete an hour-long recital of varied music at the end of the year. I definitely spent a lot of long hours locked away leading up to that and building up the stamina required.”

Andrew was accepted into the Sir Edmund Hillary programme for his musical talents as a percussionist. As a Sir Edmund Hillary scholar, Andrew will have his course fees covered, receive specialist coaching and mentoring, and will take part in personal development and leadership programmes.

The Sir Edmund Hillary Scholarship, established in 2005, is given to students who are high academic achievers and who also excel in sport or creative and performing arts.

Music in the family

Andrew is no stranger to a life of music, and coming from a musical family, it’s no doubt that the talent runs in his blood.

“My mum is a music teacher at Chisnallwood Intermediate School and my brother runs a Christchurch studio called Orange Studio. My family has always been musical and I played many instruments when I was younger but drums and percussion are my passion.”

Passion for music leads to success

Andrew has been practising and playing percussion for just over 10 years now, and in that time has appeared as a soloist with the New Zealand Secondary Schools Symphony Orchestra, performed with Placido Domingo, and played for Scottish percussionist Colin Currie as part of a Master Class in Wellington. And it doesn’t stop there.

“I’ve enjoyed success in the National Concerto Competition in 2011, and I also won my category in the 2013 Big Bang percussion competition. I was also involved in a number of Chamber Music competitions in high school.”

Computer science thrown into the mix

Undertaking a computer science degree seems far removed from music, but Andrew says they are more similar than people think.

“Both are a mixture of language and mathematics, and require both creativity and dedication. Computing was something I wanted to do when I took a couple of computer science papers last year as part of my music degree. They were much more fun than I thought.”

As for the future, he plans to pursue a career in computer science, while performing on the side where he can still “make a lot of noise.”