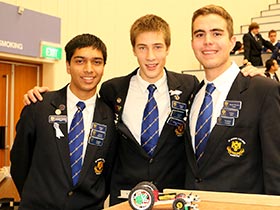 OsPEn day: St John’s College students (from left), Jason Carvalho, Jacob Fransen and Luke Orange had the fastest car at day one of last week’s OsPEn Days event at the University of Waikato.

A team of students from St John’s College, Hamilton were the winners of the Model Car Speed Competition at day one of the University of Waikato’s 28th annual Osborne Physics and Engineering (OsPEn) Days.

The lunchtime competition was part of the overall programme aimed at Year 12 and 13 students who are high achievers in science and included physics and engineering-themed lectures and practical demonstrations.

Participating schools were sent a 3-volt electric motor and a set of nylon gears for students to work on in teams. Their aim was to design and build a small battery-powered model car that could travel a distance of five metres up a 4° inclined plane. The St John’s College team’s winning vehicle travelled the full distance up the ramp in the fastest time of 3.48 seconds, beating competitors, including the School of Engineering’s staff entry. On day two of the event Pukekohe Christian School took things one step further, with a time of 2.98 seconds.

“We bring students to this event every year because we can see the value of showing them how the physics they are learning at school can be used in the wider world,” says St John’s College physics teacher Ms Fiona Wolff. 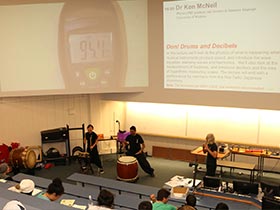 OsPEn day: Wai Taiko Drummers performed at OsPEn Days to demonstrate the decibels created with their sound - shown on the screen above them.

Over 500 students from as far afield as Auckland and Hawke’s Bay attended the two-day event. The focus was on applications of physics, with speakers providing examples such as optical communication through ultrafast fibre and broadband, the Doppler effect, careers in automotive engineering and the physics behind musical instruments, with a special performance from the Wai Taiko Drummers.

Osborne Lectures began in 1986 in honour of Dr Roger Osborne, who taught physics at Waikato University from 1970 to 1985. During this time he was responsible for organising and presenting a significant number of lectures for Year 12 and 13 physics students in the Waikato region. From 2002 the lectures became known as the OsPEn Days.