STRATUS project can put New Zealand on global IT map 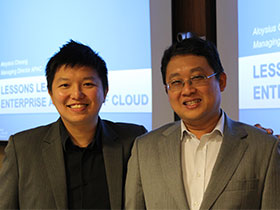 A University of Waikato cyber security research project has the potential to define New Zealand's ICT industry and have a worldwide impact, a visiting expert says.

Aloysius Cheang is the Asia Pacific Managing Director for the Cloud Security Alliance (CSA) and actively contributes to the University's Cyber Security Lab as a member of its Industry Advisory Group.

He has been in the country giving public talks and having discussions about the ground-breaking STRATUS (Security Technologies Returning Accountability, Transparency and User-centric Services in the Cloud) project, a six-year, $10.6 million Ministry of Business, Innovation and Employment-funded project which it is hoped will provide a significant boost to New Zealand's fledgling cyber security industry, along with creating tools which will return control of cloud-based data to users.

Mr Cheang says the STRATUS project is undertaking a comprehensive scope of cyber security work and "is something that will impact on the industry".

What is important, he says, is that its work is aligned with the rapidly growing cyber security industry.

"It is no good developing all these things if no-one uses them."

"This is an opportunity to define ICT for New Zealand and for a global audience to take notice of New Zealand technology."

He says the country has the right environmental factors to support tech start-ups and projects such as STRATUS would only reinforce that.

At a speech to students, academics and members of the New Zealand Institute of IT Professionals, Mr Cheang says the cloud is now mainstream and surveys showed there had been a significant decrease in resistance to organisations using it.

"Organisations should adopt a cloud-first strategy when introducing new technology," he says.

"Agility is one of the main reasons to go to the cloud. Businesses need to be agile."

He says the CSA was dedicated to building trust in the cloud.