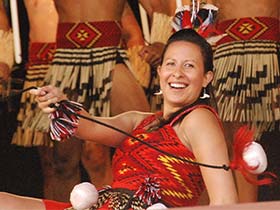 The Kapa, which begins on 13 February at 7.30pm, pits 24 top kapa haka exponents against each other and former students Kahurangi Maxwell, Tiria Te Kurapa, Rakena Takerei and Tuirina Wehi are among those involved.

Another former student, Mataia Keepa, is also involved as a language consultant for the production company and writing the compositions which are heard on the show.

Over the course of 12 episodes, contestants will be embroiled in gripping kapa haka challenges as they hope to impress the panel of expert mentors, which includes Puka Moeau, Dan Vaka, Rob Ruha, Tuirina Wehi, Tiria Te Kurapa and Kahurangi Maxwell.

Producer Nicole Horan, of Black Inc Media, says the contestants had to dig deep in order to stay in the competition.

“This process was a huge surprise to the 24 kai haka, but their passion for kapa haka and the whakawhanaungatanga saw them accomplish what some would think was near impossible,” she says.

Host Mātai Smith said he saw triumph, tantrums and tears during the course of filming, in which performers had little time to prepare for each challenge.

“It’s not like Te Matatini or regional comps where you have a few weeks or months to prepare,” he says. “I’m talking only a couple of hours to learn the words, put a tune to the item and then choreograph it so the pressure is really on.”

Students on show is licensed under a Creative Commons Attribution 4.0 International License.