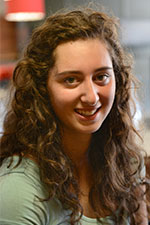 Choosing Waikato: Former Campion College student Monique Smith is now studying for a Bachelor of Social Sciences at the University of Waikato.

Being able to combine study with her sport at Waikato University was a huge plus for former Campion College student Monique Smith.

Monique is now in her second year of a Bachelor of Social Sciences majoring in psychology, and is also one of the University’s Sir Edmund Hillary Scholars.

Monique says one of the reasons she chose to study at Waikato was that there were plenty of BMX tracks to ride on in the area, and because the Hillary Scholarship supported her sport - BMX - as well as her study. She belongs to the Gisborne BMX Club and has been into BMX since she was 10 years old.

During her first year at Waikato, Monique lived in one of the University’s Halls of Residence, Student Village.

“I really enjoyed it. I met heaps of new people and it gave me easy access to lectures and events on campus.”

One of the things she loves about studying at uni, is the flexibility around study.

“If I miss a lecture, I can always catch it up online.”

Monique says she attended a careers expo before she made her choice to come to Waikato and that it gave her lots of information all in one place on what was available in terms of study options.

Student Recruitment Advisers from the University of Waikato will be at the Gisborne Careers Expo at Showgrounds Park Event Centre on Sunday 16 March from 10am-5pm and Monday 17 March from 8.30am-3pm.