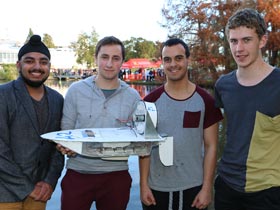 The winning student team: From left - Sukhjit Pal Singh, Matthew Gerbich, Hamish Nicoll and Campbell Wray. Also in the team but absent on the day were Miriam Aitken, Pritpal Chahal and Ben Thornton.

Each year, convenor of the Foundations of Engineering paper Dr Rob Torrens organises the boat building project for all first year engineering students, who test their designs in a series of elimination races across the campus lake. The fan-propelled boats complete races around a course which test their manoeuvrability and whether they could last the day.

Team Argentina won the final battle, which came as a surprise for first-year engineering students Sukhjit Pal Singh, Matthew Gerbich, Hamish Nicoll and Campbell Wray. Also in the team but absent on the day were Miriam Aitken, Pritpal Chahal and Ben Thornton.

“The building of the boat throughout the semester was relatively straightforward. But on the day, when the pressure was on, our boat started to fall apart,” says Hamish.

The team had issues with the batteries used to power the boat and had to make several changes to get the boat through the preliminary rounds and into the final race.

“In the end, it all came down to today and how well our team reacted to the challenges of fixing the boat.”

Organiser Dr Rob Torrens said he was pleased with how the event went: “Good weather, some competitive boats and only one capsizing,” says Dr Torrens.

The race has been held, in some form or another, for about 12 years and has become a staple event on the calendar of Waikato engineering students.

The competition also allows for more senior students to share their own experiences and try out their team management skills. During the paper, fourth-year engineering students act as syndicate managers for the teams, as part of a project management paper. Students Frikkie Fleming and Riaan Erasmus were the winning team’s leaders.

It has also long been a tradition for staff to build their own boat, which is raced during the event against other student boats.

“I’d like to acknowledge the support of Mighty River Power, Waikato Student Union and the University of Waikato grounds staff in helping make it an enjoyable day,” says Dr Torrens.

View photos from the event: https://www.facebook.com/WaikatoScienceEngineering