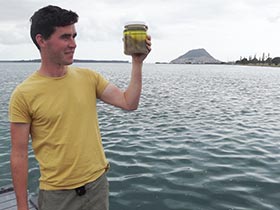 Taxonomy research: Sam McCormack with one of the sponge samples he is analysing for his Masters research.

Diving in the beautiful waters around the Bay of Plenty may not seem like your average research activity, but for a University of Waikato Masters student, it is an essential part of a study that will forge new ground globally in the field of marine chemotaxonomy.

Sam McCormack, winner of the Research-in-3 competition at the University’s 2014 Treasuring the Bay Coastal Economic symposium in January, is investigating the bio-chemical composition of sea sponges to classify and identify the different varieties found in the Bay of Plenty.

Taxonomy linked to ecology and chemistry

This process is known as taxonomy and Sam’s research will be the first project to examine taxonomy linked to ecology and chemistry, in order to look for new methods of identifying sponges. Sea sponges are becoming increasingly of interest because of the anti-cancer properties that some possess.

Sam says his research will help in the quest for new pharmaceutical leads from marine organisms, which he says is an underdeveloped field of marine science.

“Marine species face constant attack from bacteria and viruses in the marine environment, and sea sponges in particular have evolved to produce chemicals that ensure their survival. In fact, of all marine species, sponges have developed the highest number of toxic chemicals to protect themselves from predators.”

It is these chemicals which can lead to drug discoveries and which scientists are keen to find out more about, Sam says.

“The similar molecular structure of sea sponges and humans means the chemicals produced by sea sponges can also be used to treat human viruses.”

In 1986 scientists found an ingredient, Halichondrin B, in a deep-water sea sponge off the Kaikoura Coast, which led to the development of a drug released in 2010, to treat metastatic late-stage breast cancer. Sam’s research has the potential to make a similar medical discovery.

“For the welfare of people, this study is really beneficial. You could dive into five metres of water, pick up a sponge, bring it in for analysis and possibly find a new drug.”

The start of drug development

In reality the process of drug development takes a very long time, however Sam’s research is where it all begins.

“The diversity of species in our waters is immense and scientists are discovering new species all the time. Already as part of my research, we are investigating the possibility of three new species of sea sponge in the Bay of Plenty, which until now have not been identified.”

Sam is working with the University’s Chair in Coastal Science, Professor Chris Battershill, who has led biodiscovery teams in New Zealand and Australia, and was instrumental in the development of the Halichondrin B chemical found in sea sponges. It was a lecture by Professor Battershill on aquaculture during Sam’s undergraduate degree that spurred his interest in marine biodiscovery. Sam is also working with Dr Michelle Princep, Senior Lecturer in Chemistry at the University of Waikato in Hamilton.

Originally from Ireland, Sam moved with his family to New Zealand when he was 15 years old. He attended Aquinas College before completing a Diploma of Marine Studies at the Bay of Plenty Polytechnic. Sam then transitioned into the Bachelor of Science at the University of Waikato in Tauranga where he completed the third year of his degree. Sam aims to finish his Masters degree in February 2015.