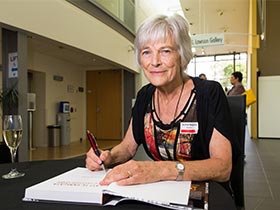 Ko Te Tangata – for the people, is a good and appropriate name for a book that tells the story of the University of Waikato’s first 50 years. The University’s establishment was driven by the local community and half a century later, it is a vital part of the Waikato economy and community.

The book was launched on February 14, 2014, to mark the start of the University’s golden jubilee celebrations, and the date coincided with the University’s first council meeting held 50 years ago in 1964.

Ko Te Tangata: A history of the University of Waikato was written over four years by Emeritus Professor Noeline Alcorn. She interviewed between 90 and 100 people for the book, some more than once, trawled through University Council and University Grants’ Committee minutes and reams of articles. She says the detail contained in the old minutes – very formal and almost verbatim – was a rich source of information.

“I thought it was important to tell the stories, as well as record significant events,” says Professor Alcorn. “It hasn’t always been plain sailing on campus. Students and staff have managed to make headlines at various times, but that’s all part of our history.

“What becomes clear is that the University, or those running it, were innovative and prepared to be different, or do things differently.” Professor Alcorn says the first Vice-Chancellor Sir Don Llewellyn had a vision of what the University should be and he fought for that.

“From the outset there was a commitment to Māori distinctiveness and Māori learning; we were the first to introduce Women’s Studies, and people I spoke to who’d come to Waikato from other universities found that the emphasis placed on students was something to be valued here.”

The four VC’s carry the story

Professor Alcorn says she had to think hard about how to frame the book and says to some extent it is chronological but the four VC’s help carry the story, with each being quite distinctive.  “And various themes weave their way through the text – context, people, interaction, assumptions and issues that impacted staff and students.

“The university’s story is an exciting one. It’s a success story, but that success was hard won.”

The cover for Ko Te Tangata was a special commission by long-time staff member and artist Donn Ratana and the book is on sale at the Academy of Performing Arts for $50 a copy.

Telling our story is licensed under a Creative Commons Attribution 4.0 International License.