The business of ageing 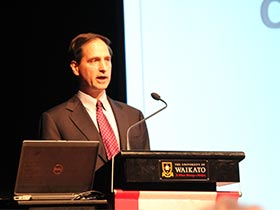 Health and demography matter; they matter a lot, and policy makers also have a role to play in creating healthier and wealthier, better educated communities.

The University of Waikato’s Visiting Golden Jubilee Professor, David Bloom from Harvard University in the US, told a full-house at the University of Waikato last night that healthy populations mean people are more productive, which means economies thrive and attract more investment and trade, healthy people save more and have healthier children who have better cognitive function and therefore become better educated.

Professor Bloom is a specialist in economics and demography, based at the Harvard School of Public Health. The 200 people who came along to listen heard him talk about building healthier communities, international demographic trends, and then New Zealand’s demographic situation.

He talked about the demographic dividend – where countries such as New Zealand have low fertility rates and the burden of raising and educating children is reduced, which means resources can be re-distributed into programmes for economic growth.

And while “healthier means wealthier”, Professor Bloom said more money should be directed at disease prevention, particularly non-communicable diseases caused by such things as obesity and smoking. “Greater longevity can be both a blessing and a curse,” he said. “If people are healthy, they can work longer, but if they’re ill or immobile, living longer will only extend their misery and suffering, and nobody wants that.”

Professor Bloom praised the introduction of KiwiSaver, but also recommended New Zealand raise the age of universal superannuation, because keeping at 65 will be unsustainable as the numbers of over 65s increase - expected to be 23% of New Zealand’s population by 2050. He urged government and employers to find ways to offer more choices for ageing workers, such as retraining, flexible hours and worker wellness programmes. “Beware the business-as-usual approaches that fail to adapt to change,” he said.