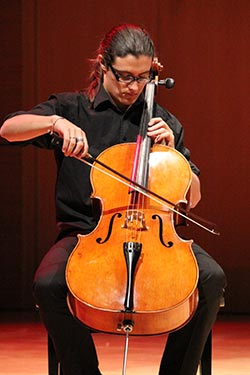 Waikato graduate: Santiago Cañón Valencia returns from Colombia and the USA and is putting on a special concert. in July.

Waikato graduate, Hillary medallist and gifted cellist Santiago Cañón Valencia returns from Colombia and the USA and is putting on a special concert with Katherine Austin, senior lecturer in Piano at Waikato.

The Colombian teen, now 19-years-old made his debut at age six, performing the Vivaldi Concerto in A Major with the Bogota Philharmonic Orchestra.

Santiago has returned to Waikato for a short time only to record two CDs with Katherine Austin to capture the work he did in New Zealand with James Tennant and Katherine Austin over the six years he studied at Waikato from 2007-2012.

Santiago completed his Bachelor of Music last year and has been continuing his studies in his home country of Columbia while trying to cement his international career as a soloist.

The concert will be held on Friday 4 July, 8pm at the Dr John Gallagher Concert Chamber, at the Gallagher Academy of Performing Arts.

Tickets are $30 from Ticketek or the Academy box office, or free to students and to ticket-holders for Gregor Morandini’s CD fund-raiser House Concert on 21 June.

The prodigy returns is licensed under a Creative Commons Attribution 4.0 International License.