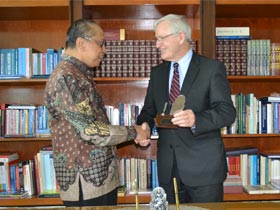 The University of Waikato has signed a Memorandum of Understanding (MOU) with Airlangga University, one of Indonesia’s top tertiary institutions.

Airlangga University is based in Surabaya, Indonesia’s second largest city.

Following two days in Surabaya, the delegations heads to the capital, Jakarta, where it will visit secondary schools before hosting an event at the New Zealand Ambassador’s residence for alumni and friends to mark the University of Waikato’s 50th anniversary.

Ties strengthened with Indonesia is licensed under a Creative Commons Attribution 4.0 International License.