Tikanga experts appointed to Kingitanga board 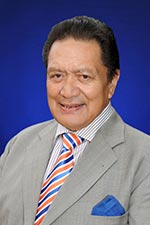 Tekaumārua: Professor Pou Temara (Tūhoe) has been appointed as a member of the King's Council of Twelve.

Two University of Waikato staff members are among a dozen Māori leaders who have been appointed to a new national advisory board to Māori King Tuheitia.

Tekaumārua dates from the second Māori King Tāwhiao until the time of Te Arikinui Dame Te Atairangikaahu, and was selected from within Waikato-Tainui tribal membership. Kingi Tuheitia last August signalled his intention to re-establish Tekaumārua but with a wider membership and asked iwi leaders to suggest suitable candidates.

Waikato are the kaitiaki or caretakers of the Kīngitanga and King Tuheitia wanted to give tribes from around the country a greater say in the growth and development of the movement in the modern era.

The final makeup of Tekaumārua was decided after 48 iwi leaders met at Waikato-Tainui College for Research and Development. The council will advise and represent the king on key issues and kaupapa affecting Māori development on social, cultural, economic, spiritual and political issues.

Tekaumārua: Te Kahautu Maxwell has been appointed as a member of the King's Council of Twelve.

Professor Temara says his appointment is a great honour and the re-establishment of Tekaumārua will benefit the Kīngitanga.

“It takes the Kīngitanga to the people,” he says.

“Opening Tekaumārua to the motu influences the motu. People will begin to think about the Kīngitanga.”

Relationship with the University

Professor Temara says his appointment will also be positive for the University.

Mr Maxwell says the pan-tribal makeup of Tekaumārua is a good way of connecting iwi other than Tainui to the Kīngitanga.

“It is a way to show external iwi that you are part of the Kīngitanga movement. It will be visible to my people that they are part of it,” he says.

He will take the views of his people to Tekaumārua but “for me it’s about uniting the people.”

“We talk about uniting the people, kotahitanga, and this is a step in that direction.”

Tikanga experts appointed to Kingitanga board is licensed under a Creative Commons Attribution 4.0 International License.