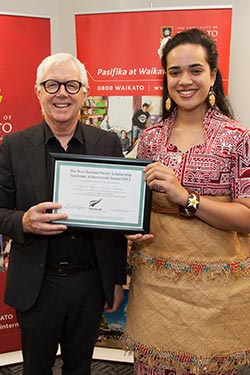 The future is looking bright for 18-year old University of Waikato Tongan student, Amelia Faotusia, who has been awarded the New Zealand Development Pacific Scholarship for Highest Academic Achiever in 2013 by the Ministry of Foreign Affairs and Trade (MFAT).

Miss Faotusia is currently in the second year of a Bachelor of Business Analysis (BBA), majoring in Economics, at Waikato Management School and won the award based on her outstanding academic achievement in her first year of study.

The award was presented on behalf of MFAT by Waikato Management School Acting Dean Associate Professor John Tressler at a ceremony and lunch today in front of family members, including her mother who had flown in from Tonga that morning, as well as other scholars from the New Zealand Aid Programme who are all studying at the University of Waikato.

International Student Advisor Caitriona Gyde says the support these students receive from their families is tremendous and contributes to their academic success.

“To be awarded such an important scholarship at just 18 is an incredible achievement and the ongoing love and support she has received from her family back home has played a part in this,” she says.

“MFAT indicated that Amelia was a credit to her country and it does the scholarship proud to have someone like her be the recipient. She will have a promising future ahead of her.”

An economist himself, Dr Tressler, congratulated Miss Faotusia on her achievements in what is reported to be “quite a tough programme” and wished her well for her future endeavors.

While Miss Faotusia plans to put the monetary prize towards her future studies and a new laptop, she said the meaning behind the award bared greater significance.

“This award means more to me than money, it symbolizes encouragement and motivation for me and my fellow scholarship holders to strive to be the best we can academically,” she says.

“Upon completion of my studies, I hope to return home to Tonga and play a part in helping with the country’s economic development.”

The purpose of the NZ Aid Development Scholarships is for awardees to gain knowledge and skills in third level education in either post-graduate or under-graduate study in specific subject areas approved by the New Zealand High Commission in their home country.