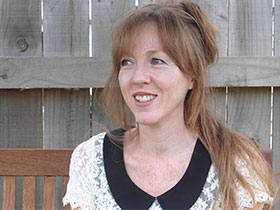 Dr Slaughter’s short story Scenes of a long-term nature has won the 2014 Bridport Prize worth $10,000. She is currently in London where she picked up her prize and read her winning story at the award presentation. Her story portrays random scenes from a marriage, all out of sequence.

Dr Slaughter’s piece was selected by short story judge, novelist Andrew Miller, who described the story as “a tender examination of a marriage and a fine display of the difficult art of selecting the telling moment, the detail that speaks”.

The story was written in the middle of a heavy teaching load, Dr Slaughter says, and most of it came together in a single afternoon. “I was feeling a bit stressed with all the work I had to do, and I wasn’t getting any time to do my own creative writing. One of my colleagues suggested I shut myself away and take some time to myself, which I did.  I’d had the idea for a story for a while, I just needed time to write it down.”

Scenes of a long-term nature

Scenes of a long-term nature focuses on one-long term relationship, a fictional one, says Dr Slaughter, and actually ends where the couple meet. “The idea came to me from one of the exercises I get my creative writing students to do.”

The Bridport Prize was established in the UK in 1973 to encourage emerging writers and promote literary excellence. This year’s competition attracted more than 15,000 writers from 80 countries. Winners in the poetry, short story and flash fiction categories will be published in the Bridport Prize 2014 anthology and their work will be read by leading London literary agents. The top 13 eligible stories are submitted to the BBC National Short Story Award and The Sunday Times EFG Private Bank Short Story Award.

The prize money will certainly come in handy, says Dr Slaughter. “I’ve been commuting to the University of Waikato from Thames for the last few years, and we’ve now decided to move the family to Hamilton, so the prize money will be a big help.”