Mr Scotter is a senior partner at Hamilton law firm Harkness Henry and is a specialist in litigation.

He is known for his kindness and dedication to the legal profession and has been an unfailing supporter of the University of Waikato’s Te Piringa - Faculty of Law. 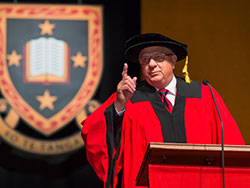 Also honoured at graduation was Senior Court of Appeal Judge and President of the New Zealand Law Commission Sir Grant Hammond, who received a Doctor of Laws degree (LLD) in recognition of his internationally recognised legal scholarship on the law of remedies and in the area of the role of the judiciary and judicial boundaries. Trio honoured at graduation is licensed under a Creative Commons Attribution 4.0 International License.