Trio honoured for their work 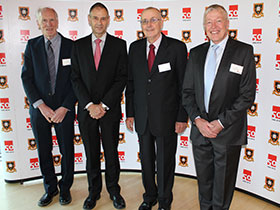 More than 100 people gathered at the Gallagher Academy of Performing Arts on Wednesday to honour the work of three University of Waikato professors.

Professors Russell Bishop, Alistair Wilkins and Richard ‘Dick’ Bedford were each awarded the title Emeritus Professor at the ceremony, which was attended by friends, family and colleagues of the trio.

The title of Emeritus Professor is awarded to people who have held a professorship at the university for at least 10 years, made a substantial contribution to the university, demonstrated outstanding academic leadership and have international credibility in their academic field.

Professor Bishop (Waikato-Tainui, Ngāti Awa) retired earlier this year, 16 years after being appointed as the University of Waikato’s Foundation Professor of Māori Education. His work is viewed as one of the most significant contributions to educational research and practice in New Zealand in the last 50 years. Professor Bishop’s work is centred around the Te Kotahitanga Research and Professional Development Project, which supports teachers to improve Māori students’ learning and achievement and to provide a culturally responsive context for learning. He led this ground-breaking – and hugely successful – initiative from 2001 to 2012 and it is now widely regarded as the most effective programme of professional learning and development of its type.

Professor Bedford was appointed professor of geography at Waikato in 1989 and, while officially retired, still carries out research on migration processes for the National Institute of Demographic and Economic Analysis (NIDEA) based at the University of Waikato. His research on migration systems attracted considerable attention from the New Zealand government and in 1990 he received the Commemoration Medal for services to New Zealand and was subsequently appointed academic advisor to the New Zealand Ministerial Advisory Group on Immigration.

Professor Wilkins came to the University of Waikato in 1975 as a lecturer, and retired in 2013.

His academic qualifications include a Bachelor of Science (Hons) First Class in Chemistry from the University of Otago in 1968, and a PhD (Organic Chemistry/Natural Products) in 1972, also from Otago. His work in the field of analytical chemistry is legendary and was of great importance in securing significant funding for the University to investigate the environmental effects after the grounding of the Rena in 2011.

After the Rena struck Astrolabe Reef in the Bay of Plenty, Professor Wilkins worked to accommodate requests of the public, regional and central government for information about the oil and other contaminants coming from the ship. His work in fingerprinting the oil was of prime importance to the Ministry for the Environment, Maritime New Zealand and the Bay of Plenty Regional Council.

Trio honoured for their work is licensed under a Creative Commons Attribution 4.0 International License.