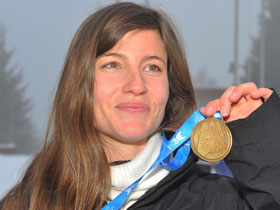 Judges awarded Natalie a score of 81.25 in the snowboard slopestyle event which secured her the gold ahead of two Swiss snowboarders who took silver and bronze. Natalie was part of the seven-strong New Zealand team competing at the Universiade in Italy in December.

“I was very proud to wear black and bring home a medal for New Zealand,” says the 23-year-old. “It was an awesome feeling to be the first Kiwi to medal at these games, and gold is my favourite colour!”

In slopestyle, athletes attempt to perform difficult tricks while getting the highest amplitude off jumps, with emphasis on performing different types of tricks instead of doing one trick repeatedly. Slopestyle is one of the most popular events at the Winter X Games and will become an Olympic event, in both skiing and snowboarding forms, at the 2014 Winter Olympics in Sochi, Russia.

The Winter Universiade is an international sporting and cultural festival staged every two years in a different city. The Trentino 2013 Winter Universiade was the largest in history with 1725 athletes from 51 nations competing across 79 sporting events.

She hopes to qualify for the 2018 Winter Olympics in Korea and will be following the competition circuit for the next four years. Her next big steps are to compete in the FIS European Cup held in the Czech Republic in February 2014 and the Snowboard World Cup held in Croatia in March 2014.

“I have a great team of supporters behind me, and I plan to train hard with the ultimate goal being to compete in the 2018 Winter Olympics,” she says.

Natalie is studying a conjoint degree combining a Bachelor of Management Studies and a Bachelor of Laws at Waikato. In February, she is heading to Nepal’s Khumba Valley having received a Step Higher Award to work with and see first-hand the community projects Sir Edmund Hillary started.

“I’m so excited about my upcoming trip to Nepal, obviously because it will be such an adventure but also to see the great things that Sir Ed has done for the Nepalese people. It is a real privilege to follow in the footsteps of such a hero and I will have a trusty $5 note in my pocket every step of the way.”