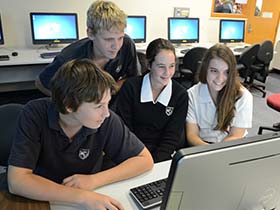 Lab 5 in R Block at the University of Waikato was a sea of blue uniforms as Year 10 Cambridge High School digital technology students took part in two computer Game Maker training sessions on 5 and 7 February.

Cambridge High School teacher in charge of digital technology Colin Wood says it was the first time the school had taken part in computer programming workshops at the university.

“It’s a brilliant opportunity that has enabled students to acquire skills in a new environment, meet university lecturers and maybe open up the idea that this is where they could be studying in a few years’ time.”

Computer Science senior tutor Nilesh Kanji ran the workshops and says they play an important role in building a relationship with the high school.

“It has been absolutely awesome,” he says. “I really enjoyed it. The students were very enthusiastic and had a lot of fun while learning new skills. This will tie in nicely with the work they will do at school this year.”

In the workshops, Mr Kanji took students through the steps involved in creating a Space Invaders-type game using the visual environment in the Game Maker software. The students learnt how to create the various game objects and how to make them respond to the player's actions during the game. By the end of the session, the students had learnt many of the mechanics involved in creating games in the Game Maker environment.