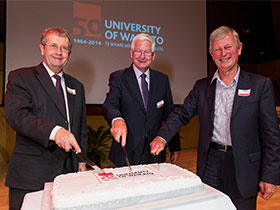 University of Waikato 50th celebrations officially began on Friday with the launch of Ko Te Tangata a history of the University’s first 50 years.

More than 400 present and former staff and long-time supporters of the University were on campus for the book launch and afternoon tea. Ko Te tangata was written by Emeritus Professor Noeline Alcorn who provided the audience with a quick run-down of the University’s history and its many achievements during its first half century. “History enables us to understand the past and plan for the future,” she said.

“Firsts” for the University

Professor Alcorn touched on a number of “firsts” the University had achieved, including leading the way with Women’s Studies, the teaching of law in context and the first university to amalgamate with its local teachers’ college. 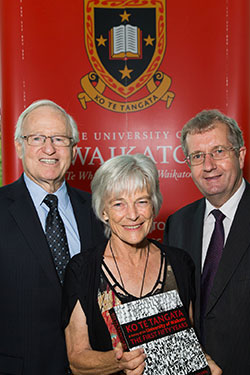 Vice-Chancellor Professor Roy Crawford said the fact this University has had just four vice-chancellors shows commitment to the long-term. He praised the dedication of all staff over the years who have “made sure we consistently deliver excellence” and said the University had potential to become a global leader and still remain true to its roots by being accessible to people from all walks of life.

The Vice-Chancellor also told the audience about the Golden Jubilee Scholarships being offered to school leavers for study commencing in 2015. The value of each scholarship will be $10,000 a year for up to four years and will be awarded on the basis of academic excellence, leadership potential, and community citizenship.

The University’s 50th celebrations will continue throughout the year and include a Community Open Day on Saturday 17 May.