University of Waikato increases efforts to care for campus lakes 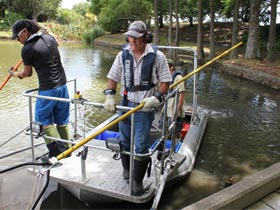 Pest fish removal: Professor Brendan Hicks undertaking work to remove pest fish from Oranga Lake on the University's campus.
The University of Waikato is urging people to think carefully before disposing of waste, liquids and hazardous products into drains on campus because of the negative impact on the health of the campus lakes.

Environmental and Sustainability Manager Rachael Goddard says lake conservation efforts have been an ongoing project at the University for more than two years.

“We monitor the lakes because they are an integral part of campus and are enjoyed by staff, students and the community. We were disappointed to find ammonia levels had spiked earlier this year, which suggests someone had dumped a liquid contaminant into the lake,” says Ms Goddard.

There are 12 storm water pipes running into Oranga Lake. The campus lakes, built in the 1960s, are connected to the storm water system, which in turn discharges into the Waikato River. Ms Goddard says the University takes its responsibility in maintaining the lake’s water quality, and any run-off into the river, seriously.

A team from the University’s Department of Biological Sciences, led by Professors David Hamilton and Brendan Hicks, are currently working on improving Oranga and Knighton lakes. In addition to monitoring water quality they frequently remove pest fish, including the removal of more than 6,000 pest fish this year.

Professor Hicks says it is almost certain that pest fish are being deliberately introduced to the lake, and that people also need to be aware that getting rid of an unwanted pet goldfish into large bodies of water has damaging consequences.

“A 4kg koi carp, for example, can carry as many as 400,000 eggs. Koi carp thrive in shallow lakes like those on campus and compete with native fish and eels for food.”

Most of the fish removed were tiny gambusia (mosquitofish), but more than 1,400 goldfish and 35 koi carp were also removed, including two adult koi carp weighing 4.4 and 3.5 kg each. Three more adult koi carp totalling 9.6 kg were removed in January, and population estimates suggest that at least 100 smaller koi carp remain in Oranga Lake. As these grow into adults and become more visible they can be removed before they spawn.

“Based on our studies of other shallow Waikato lakes we can estimate that, if left unchecked, the koi carp population in Oranga Lake could increase to about 500 adults weighing about 1,400 kg in total. Eight adult koi carp were captured in Knighton Lake in March 2012, suggesting that a concerted fish removal effort needs to be made in this lake too.”

Local community members can help the University care for its lakes by strictly avoiding the disposal of hazardous waste into campus drains and the lake itself, and by finding alternative homes for unwanted goldfish with friends and family, or checking with a local pet store for other options. It is forbidden by law to release live koi carp into lakes and rivers.

University of Waikato increases efforts to care for campus lakes is licensed under a Creative Commons Attribution 4.0 International License.