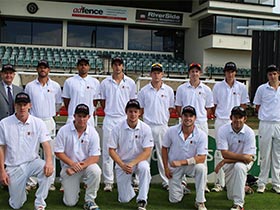 The University of Waikato Vice-Chancellor’s XI came up just a few runs short in their match against Northern District’s Māori.

The annual University of Waikato VC Cricket Challenge match was held at Seddon Park on Monday 24 March. The toss was taken by Vice-Chancellor Professor Roy Crawford and Northern Districts Māori captain Leighton Parsons. Northern won and elected to bat on what looked to be a slow, flat track.

Northern reached 199/7 off their 40 overs with Brook Simpson making 46 and Parsons not out on 41.

The best of the Waikato University bowlers were Tommy Clout who took 2/24 off seven and Henry Cooper with 2/39.  In reply, the university side struggled early until Mike Dodunski came to the crease and struck an impressive 85 off 87 balls. The tailenders fought hard against the Northern bowling attack reaching 188/9, finishing eight runs short and giving Northern Māori their first win against the university side.

Establish the tradition of the VC Cricket Challenge

Waikato University’s High Performance Student Manager Greg O’Carroll, who helped organise the game with Northern Districts Cricket, says the match is a chance to establish the tradition of the VC Cricket Challenge and foster emerging talent at the university and for Northern Districts Māori.

“We fielded a slightly younger team this year, with some exceptionally talented players joining the squad. They were up against a side that has played together several times this summer already and boasting a 100% winning record, so we knew we were in for a good challenge.”

He says the lads enjoyed their day despite ending up on the wrong side of the ledger. “I know that they were very keen to hold on to the trophy and they’ll have the opportunity to win it back next year,” says Mr O’Carroll.