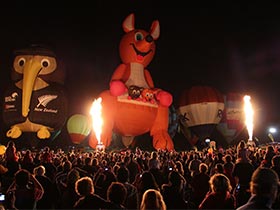 Lighting up the sky: Balloons inflate to music in the Balloon Glow Show.

The University of Waikato is preparing to welcome thousands of people onto its fields for the Balloons Over Waikato ASB Nightglow on Saturday 29 March.

The Nightglow is the highlight of the Balloons event, which sees people flood onto the University's sports fields to watch tethered hot air balloons inflate to music in the Balloon Glow Show.

To celebrate the University’s 50th anniversary this year, music at the Nightglow will be from the past five decades of music, from the 1960s through to today, and the Royal New Zealand Airforce will be conducting a flying display in a CT-4E Airtrainer.

The University and Hamilton City Council are two of the Strategic Partners of the event.

Vice-Chancellor Professor Roy Crawford says it is fitting the University is sharing its 50th birthday as Hamilton City celebrates its 150th.

Bringing the community to the campus

“Every year we welcome thousands of people on to our campus through the Balloons festival and other events, giving the community a chance to connect with us on our beautiful campus.”

The programme starts at 4pm, with the Nightglow getting underway at 7.45pm and going through until 8.20pm. The balloons will present a light and sound show to the theme of this year’s Party On theme under the direction of creative producer Trevor Graham.

At 8.20pm, fireworks will light up the sky as Waikato pyrotechnic master Dr Martin van Tiel creates a magical display to cap off the evening’s entertainment.

The evening wraps up with more music, finishing at about 9pm.

Find out more information about on the Nightglow event on the official Balloons Over Waikato website.

University prepares for Nightglow is licensed under a Creative Commons Attribution 4.0 International License.