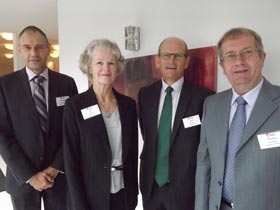 The University of Waikato recorded a $9.4 million surplus in 2013 and has retained its status as a low-risk institution, the Tauranga business community was told this morning.

Professor Crawford said the surplus was based on a revenue of $225 million and, at 4.15%, was within the 3-5% threshold of government expectations.

He said the University’s economic impact on the region was approaching $1 billion. Other highlights during the 2013 year included hosting the country’s first MOOC (Massive Open Online Course), launching New Zealand’s first cyber-security laboratory and Masters in Cyber Security, hosting the $31 million ‘Building on Success’ programme and the partnership with the New Zealand Home of Cycling’s Avantidrome.

Professor Crawford said one of the priorities for 2014 was to progress the new Tauranga CBD campus being planned by the Bay of Plenty Tertiary Partnership which comprises Te Whare Wānanga o Awanuiārangi, Bay of Plenty Polytechnic, Waiariki Institute of Technology and the University. He acknowledged receiving Bay of Plenty Regional Council support of $15 million towards the new campus funding.

Other priorities for this year included reaching Ministry Funded (MF) and Full-Cost International (FCI) enrolment targets, implementing the University’s new Strategy, and launching a fund-raising campaign. Work on the new Law and Management Building at the Hamilton Campus has just begun this week. The University continues to be ranked in the top 2% of universities worldwide, with five of its subject areas ranked in the top 150 worldwide. Education was ranked 46th out of around 15,000 universities.

This year the University celebrates its 50 year Jubilee, and will host a number of events during the year including the anniversary gala ball in partnership with Wintec and Hamilton city, Winter Lecture Series in both Hamilton and Tauranga, Jubilee professorships and Jubilee scholarships.

The annual Stakeholder Breakfast is an initiative to keep community leaders up to date with University events and achievements.