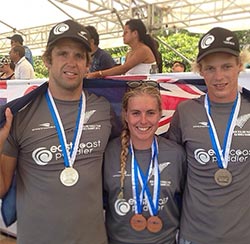 Waikato's trio: Andrew Netwon, Ashley Cochrane and Sam Shergold at the World Stand Up Paddle and Paddleboard Championships in Nicaragua.

Current and former Waikato University students made up half of the New Zealand team at the 2014 International Surfing Association’s World Stand Up Paddle and Paddleboard Championships held last month in Nicaragua.

Sir Edmund Hillary Scholar and Finance student Sam Shergold competed in the long-distance prone paddle board race. After a tactical two hours on the water, it came down to a gruelling sprint finish where he finished a close second.

“There were two of us who pulled away from the rest of the group. I dropped him with a few kilometres to go but he caught back up to me. It came down to a sprint finish up the beach,” Shergold said.

Ashley Cochrane, currently in her second year of Early Childhood Education, competed in both the technical and long-distance races, placing 4th in each and receiving copper medals. Cochrane, an Omanu surf club member coached by Simon Willis, enjoyed the experience and was excited by the opportunities of international competition in long-distance paddle boarding.

“When I finish studying I will look at going overseas to compete in longer distance racing. It’s very popular in America,” Cochrane says.

Waikato University Teaching graduate and former Hillary scholar Andrew Newton picked up silver in the technical paddleboard race. The experienced surf lifesaver previously represented New Zealand at the 2011 International Surf Challenge, but says there is still plenty to work on.

“It wasn’t a bad result but I have room for improvement,” Newton says. “I’ve learnt some lessons about how to prepare and race in hot and humid conditions for my next campaign, so acclimatization was a learning curve for me.”

Newton is currently relief teaching in Tauranga which he says allows him the flexibility to continue training and competing internationally.

Shergold and Newton who are training partners coached by John Bryant from Mount Maunganui surf club, are now focusing on their next international event, the 2014 Surf Lifesaving World Championships in France in September.

The three athletes had their competition boards sponsored by Deep Oceanboards.