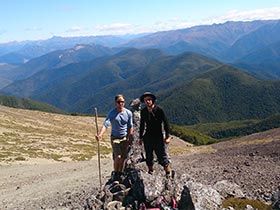 The walk involved followed the Te Araroa trail, a recently opened New Zealand long trail, which runs from the top of the north to the bottom of the south, snaking its way through bush, mountains, farms, beaches and the odd road.

“I originally came across the idea of doing the Te Araroa trail online and jokingly mentioned it to Luke as something we could do. After hearing about our potential plans for the walk, a local Institute for Professional Engineers (IPENZ) member suggested to me at the University’s Engineering Design Show, that we use this adventure to raise money for Oxfam’s Water for Survival Programme,” says Kendall.

Within two weeks the joke had become a reality and after finishing off exams at Waikato University, they were on their way. The two began on November 7 and by December 23, had completed the North Island leg. They decided to take the Christmas and New Year period off, before setting off again and finishing at Bluff on February 28, ready for the start of classes back in Hamilton on March 3.

“I worked out that we spent 95 days actually walking and five days paddling the Whanganui River in a canoe. We met so many interesting, helpful people during the tramp. There were the other trampers completing the walks, the hunters that shared their food when we miscalculated our rations, and those who let us camp on their lawns,” says Luke.

“We also experienced the most amazing scenery, with our favourites being the coastal walks in Northland and the high country tracks in the South Island. All of this made our trip a once in a lifetime experience.”

But with the highs, also came the lows, with Luke suffering from food poisoning near Te Kuiti. “We just had to keep going, as we’d booked in canoes at Taumarunui to paddle down the river to Whanganui, and knew that if we didn’t keep up at least 30km per day, then we wouldn’t make it to Bluff within the 100 days we’d planned,” says Luke.

“Many of the tracks weren’t really tracks at all and we did a lot of bush bashing to get through some areas. The scariest part was through Harper’s Pass, near Arthur’s Pass in the South Island. The rain became torrential and the rivers came up really fast,” says Kendall.

The two former Pukekohe High School students raised over $800 for OxFam. “Although this was less than we had hoped, we felt it was a good effort considering we had only two weeks between deciding to go and setting off.”

View more photos from the tramp at www.facebook.com/walkingthecloud