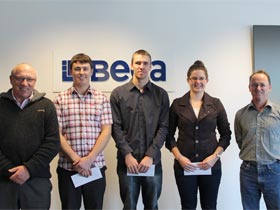 Three University of Waikato students have received Beca Awards for academic excellence and potential as a promising engineer.

The annual awards of $2500 are granted to students in their third year of study towards a Bachelor of Engineering (Honours) (BE(Hons)) degree. Carl Lickfold, Logan Curry and Holly Armit were the successful students this year.

Beca is a New Zealand-owned professional services and consulting engineering firm which undertakes projects across a range of market segments from its hubs in New Zealand, Australia and Asia.

Richard Douch, Manager for Beca in Hamilton, was again impressed by the calibre of the candidates and in particular their passion for the engineering industry. “In recent years we have seen a number of the previous scholarship recipients complete their studies and commence their careers within Beca. We take great pride in knowing that we have played a role in supporting the next generation of leaders in the industry and look forward to continuing our relationship with the University of Waikato in such initiatives.”

Carl Lickfold is studying Electronic Engineering and came to Waikato University after working for a computer repair company. He says he has really enjoyed the design projects he has worked on during his study and believes his course is doing well to prepare him for a rewarding and varied career. He’s also currently looking for part-time electronics design work to help him to improve his skills and learn more about industry practices.

Logan Curry is a former student of Reporoa College, and is studying Chemical and Biological Engineering. Highlights of his university experience so far have included living in the halls of residence, ample one-on-one time with lecturers and tutors, and the First-year Engineering Design Challenge. The challenge includes racing model boats, which students have built in teams throughout the semester. In the future Logan hopes to use his engineering skills to work in the renewable energy industry.

Holly Armit chose Waikato University as it was close to her home town of Tauranga and offered small engineering class sizes. A former student of Otumoetai College, Holly is studying Mechanical Engineering. Holly has been involved with the Young Engineers Society (YES) and says “it’s been great to be involved with a bunch of motivated people who show it’s possible to work hard and have a heap of fun.” She also credits the First-year Engineering Design Challenge as a highlight of her degree so far.

Each of the students also has the opportunity to complete an internship with Beca.