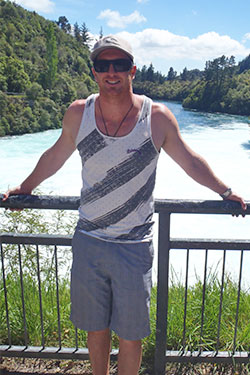 University of Waikato PhD student Steven Pratt has been named as the recipient of the 2014 Lucy Cranwell Student Grant for Botanical Research.

The commemorative grant of $2000 was awarded by the Auckland Botanical Society for Steven’s research on Conservation genetics and molecular systematics of New Zealand’s daphne, Pimelea.

“Being the recipient for this award is great news and will enhance the project by allowing me to spend more time in the field increasing the sample size,” says Steven.

Research on different species of Pimelea

Steven is researching the genetic variation between different species of Pimelea and looking to develop microsatellite markers to investigate population level variation for conservation purposes.

“There are 35 known species in New Zealand and about two-thirds of them have a conservation status, meaning they are at risk of extinction or data deficient,” says Steven.

The work Steven is doing is different to previous work in the field and herbarium carried out by now retired ecologist Dr Colin Burrows. “His research was based on morphology, the form and characteristics of the plant, so it will be interesting to find out if our genetic sequencing produces similar or very different results,” Steven says.

Steven’s research will be supervised by Dr Chrissen Gemmill from Waikato and Drs Peter Heenan and Rob Smissen from Landcare Research at Lincoln University.

He will be collecting tissue samples from the plants to extract DNA for sequencing and subsequent analysis. “We also want to develop microsatellite markers so we can investigate population-level variation for critically endangered species. This will augment conservation efforts by ensuring that genetically similar individuals are planted for restoration of at-risk populations.”

In March 2015 Steven will give a presentation about the progress of his research at the Society’s AGM.

Steven was also recently awarded a doctoral scholarship from the University’s Environmental Research Institute (ERI), worth $22,000 a year plus fees for three years' full time study.